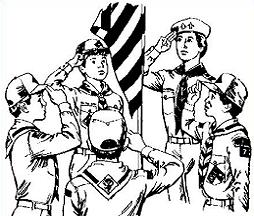 Before every NFL game the flag of the United States is displayed across the football field. A singer belts out the national anthem, and the participants and spectators of the game stand in reverence, hands over their hearts. A great deal of importance is placed on this rite, and anyone who does not participate (as in the prominent case of Colin Kaepernick) is ostracized and decried. Refusal to show profound respect is considered something nigh outright treason.

When the flag passes in a parade, the crowds along the sidewalk stand in respect. Hats are removed from heads. A hush passes over everyone assembled as the banner floats in the breeze. Everyone is expected to participate. Anyone who does not gets ugly looks and is reprimanded.

If an individual or group tears, burns, or stomps on the Stars and Stripes social media explodes with cries of “desecration”.

Churches display the flag prominently behind pulpits and on flagpoles outside their buildings. Many congregations open their services with the Pledge of Allegiance. Schools also promote reverence of the United States Flag by teaching the students from a very young age to pay homage to it every day before class. This display of loyalty to the flag has become a deeply ingrained aspect of American culture, so much so that it’s even considered a trait of a “good Christian” among most religious circles.

But if we take a close look at this mindset through the lens of Scripture, what does the objective Christian find?

When Nebuchadnezzar created the massive golden image and ordered all the people to bow to it at the sound of its anthem (Daniel 3), Shadrach, Meshach, and Abed-Nego refused. As a result of failure to comply with the state religion, they found themselves tossed into a fiery furnace.

Today, the reaction to nonparticipation in the United States’ national religion can garner similar sentiments, as demonstrated by the below screenshot of a reader comment under an online article about a “flag desecration” incident:

Is that really such a difference?

Let’s take a look at Noah Webster’s definition of “idol” as found in his 1828 dictionary:

An image, form or representation, usually of a man or other animal, consecrated as an object of worship; a pagan deity.

Did you catch that? A “representation… consecrated as an object of worship”. Worship includes songs of adulation (such as national anthems) and acts of reverence (bowing, standing, saluting). When we do these things in the presence of a flag which is a representation of the United States Republic, we are paying homage to… You guessed it. An idol.

For the customs of the peoples are delusion;
Because it is wood cut from the forest,
The work of the hands of a craftsman with a cutting tool.
They decorate it with silver and with gold;
They fasten it with nails and with hammers
So that it will not totter.
Like a scarecrow in a cucumber field are they,
And they cannot speak;
They must be carried,
Because they cannot walk!
Do not fear them,
For they can do no harm,
Nor can they do any good. – Jeremiah 10:3-8

What profit is the idol when its maker has carved it,
Or an image, a teacher of falsehood?
For its maker trusts in his own handiwork
When he fashions speechless idols. – Habakkuk 2:18

If you still insist that the flag of the United States isn’t an idol or any kind of religious object, then please answer this question: Why is the act of defacing said flag called “desecration”? Desecration means the profaning of something sacred or holy. Desecration can only be committed against religious objects. If stomping on, burning, or otherwise defacing the flag is desecration, then the flag must of necessity be a religious object. Any religious object to which we display signs of deference or sing hymns holds the position of an idol. This is an inescapable fact. Christian Americans who become enraged when the flag isn’t shown respect are idolaters.

It’s a harsh assessment, but true. This was starkly illustrated by the sudden change in “conservative” attitudes toward the rock group KISS in late 2016. Previously KISS had been widely denounced (and rightly so) for their lyrical advocacy of perversity and dissipation, including whoremongering, pedophilia, and drug abuse. But when, in the wake of the Colin Kaepernick “scandal”, KISS interrupted one of their own concerts for adulation of the United States and its flag, Christian conservatives across the nation applauded. Suddenly, because of one moment of flag-worship, all the disgusting, wretched vileness of KISS was forgotten. The band’s desecration of all things holy as decreed by Almighty God was only a shadow in the minds of conservative Americans when that same band decided to pay homage to a red, white, and blue piece of cloth.

This, my friend, is idolatry, plain and simple.

Little children, guard yourselves from idols. – I John 5:21

This gentle reminder from the apostle John, while in full agreement, stands in stark contrast to the blunt decree from the Law of God:

If your brother, your mother’s son, or your son or daughter, or the wife you cherish, or your friend who is as your own soul, entice you secretly, saying, “Let us go and serve other gods” (whom neither you nor your fathers have known, of the gods of the peoples who are around you, near you or far from you, from one end of the earth to the other end), you shall not yield to him or listen to him; and your eye shall not pity him, nor shall you spare or conceal him. But you shall surely kill him; your hand shall be first against him to put him to death, and afterwards the hand of all the people. So you shall stone him to death because he has sought to seduce you from the Yahweh your God who brought you out from the land of Egypt, out of the house of slavery. Then all Israel will hear and be afraid, and will never again do such a wicked thing among you. – Deuteronomy 13:6-11

Even if idolaters don’t live in a society in which the divinely decreed punishment falls on them in this life, they still have to face judgment and execution when resurrected on Judgment Day:

But for the cowardly and unbelieving and abominable and murderers and immoral persons and sorcerers and idolaters and all liars, their part will be in the lake that burns with fire and brimstone, which is the second death.” – Revelation 21:8

Christian, if you adhere to the belief that the flag of the United States of America – an inanimate image crafted by men – must be adored and saluted, you are guilty of idolatry. As Christians, we should already have Jesus Christ as our flag (Exodus 17:15).

Then in that day the nations will resort to the root of Jesse [Jesus], who will stand as a signal for the peoples; and His resting place will be glorious. – Isaiah 11:10

Jesus even spoke of Himself in similar terms as we would of a flag:

Yahweh-nissi – The Lord is my banner. If He is my banner, I cannot have any other. Christ demands our undivided devotion to Him and to His Kingdom. Christians can’t claim to worship Him while simultaneously standing and singing the anthem of an inanimate flag. They can’t claim devotion to Christ while excoriating someone who refuses to stand and pay homage to the Stars and Stripes (or Stars and Bars, or Union Jack, or any other flag).

6 thoughts on “Should Christians Honor the US Flag?”